The Fernie Nordic Society is a young club. It has its origin in July 2006 when several enthusiasts decided to form a nordic ski club in Fernie. With so many areas with good ski potential, how hard can it be? Well … it took a lot of effort by many people … Read on. 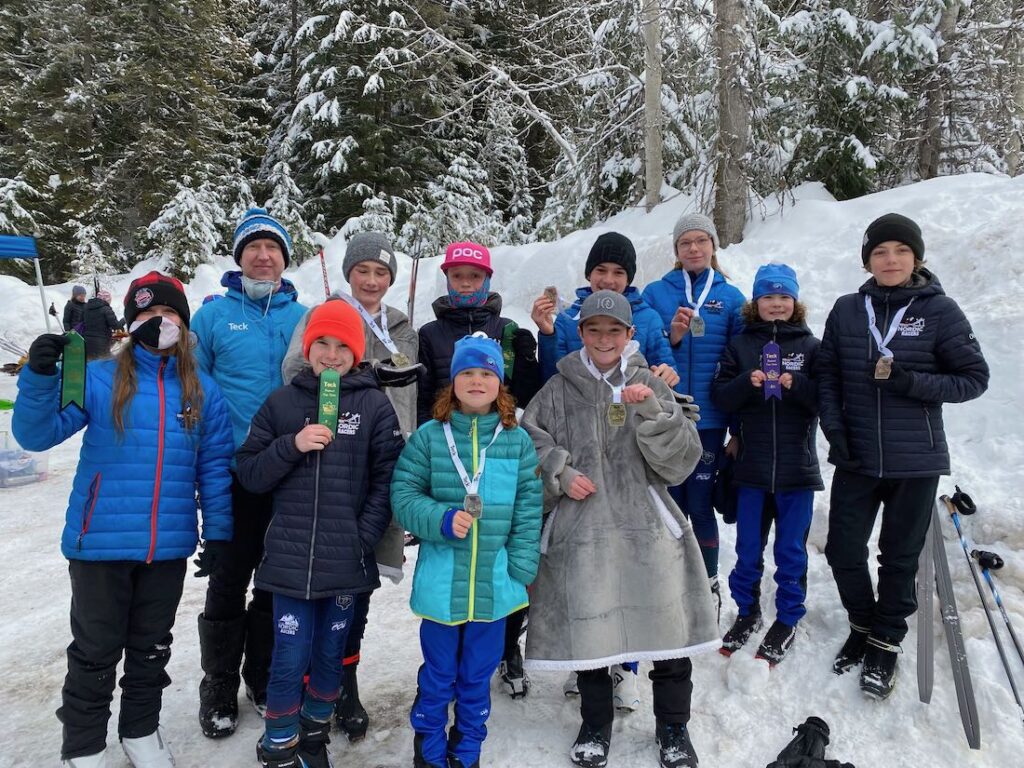 Last grooming at the Nordic Centre on April 2. Full season under COVID-19. No events or races held. No SDP program but membership record of 1,607 members. 16 Racers. New snowmobile for EVNC as ‘Old Blue’ Yamaha is retired after 13 years! The popular Lizard Creek Loop is now groomed regularly. 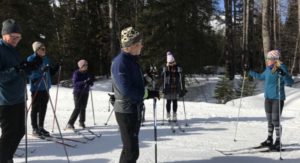 Upgrade of staging and event areas

Clearing of trees, area grading, surface cover with gravel and wood chips near the warming hut and on the wedding party space enlarged the useable area for skiers and guests. 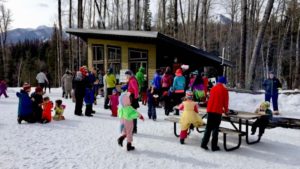 FNS acquired its first snowcat to be used by volunteers to groom the Nordic Centre trails. It is a Bombardier BR-400 of the 1994 vintage still in very good condition. Happy trails! 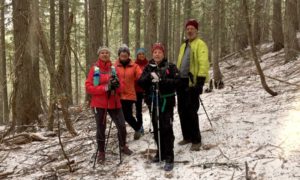 A physical training program for adults 50+ is initiated to prepare for the ski season. Coach Jeff is overseeing the daily program. Five initial participants. 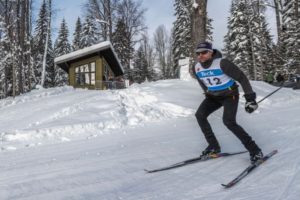 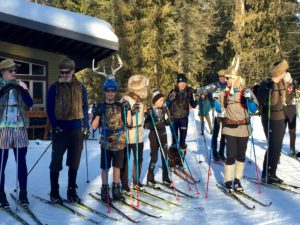 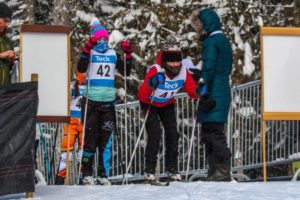 The total membership of the club surpasses 830 members 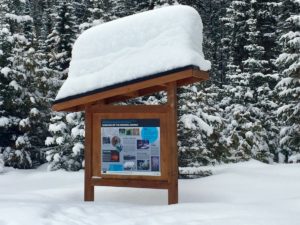 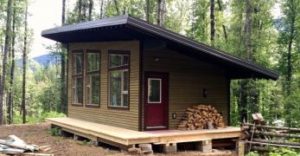 The last touches were made to the warming hut exterior during the summer of 2016. The siding was installed. Inside the window trim, walls and insulation were done and a new woodstove installed. 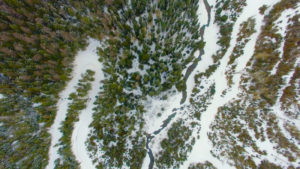 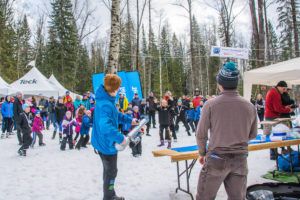 The club held the first Teck Kootenay Cup race in Fernie on February 13, 2016 at the Elk Valley Nordic Centre

Another first! The SDP program started with the first lesson of the season at the Nordic Centre near the newly built warming hut. 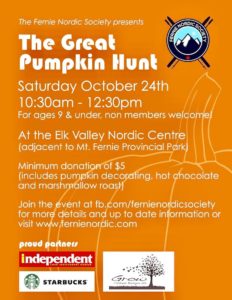 The first Great Pumpkin Hunt held at the Nordic Centre was a great success with 190 kids of ages up to 9 yo participating. 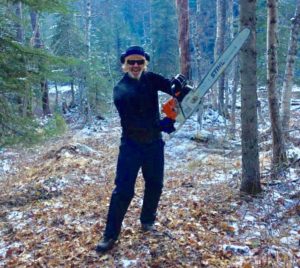 The construction work on the connector to Fernie Alpine Resort is completed. Received grant from RCR. 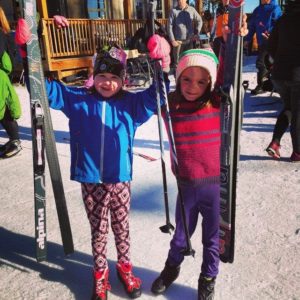 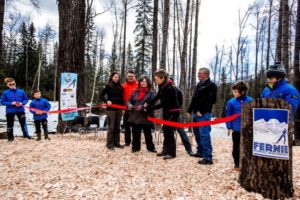 The Elk Valley Nordic Centre is officially open on this date in the presence of special guests olympian Beckie Scott and mayor Mary Giuliano. 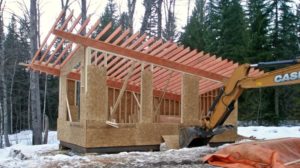 The plans have been drawn up and approved. The construction of the new Warming Hut at the Elk Valley Nordic Centre starts with the help of many volunteers.

Bridge over the Lizard Creek 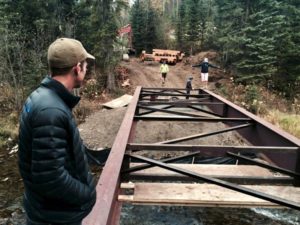 A new bridge is built over the Lizard Creek to connect the trails on The Cedars property to the ones planned on the Galloway Lumber side. The sponsorship by the Teck company allowed for the contruction of the timber covered steel and concrete structure.

Phase 2 of the EVNC trails 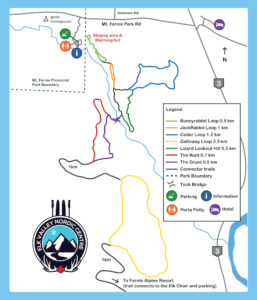 During the summer, the trail designer marked the trails within the Galloway land. Another 6 km of trails was added.

The local race team is created from young member skiers in the club under the supervision of coaches Jeff Williams and Naomi Lentz.

The new logo was adopted while keeping the original colours of the previous design. 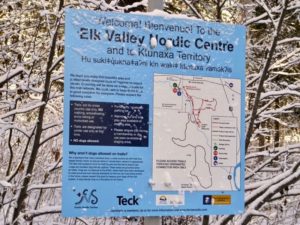 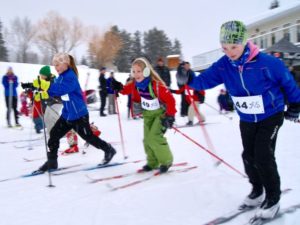 Phase 1 of the EVNC trails 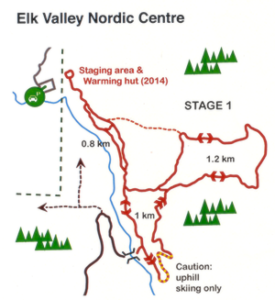 The trail designer Reidar Zapf-Gilje starts a survey on the lands owned by The Cedars development and the Galloway Lumber company to establish the initial trail network of 4 km. 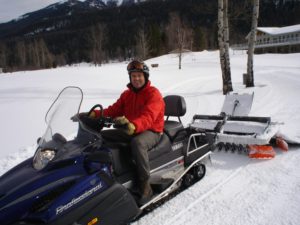 Second season for the Fernie Nordic Society.
Membership  196
SDP 12
Start of the SDP program. Purchased large Ginzu groomer. Grooming at Golf Course and at Island Lake. Grant of $25K received from the province. 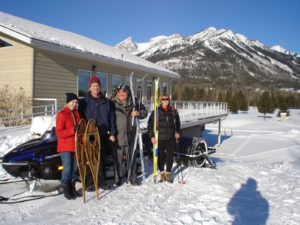 First day of skiing at the Golf Course

The Fernie Nordic Society is born

The Fernie Nordic Society was established in Fernie on July 8, 2006

Our trails at the Fernie Golf Course and at the Elk Valley Nordic Centre are now groomed and open for skiing. Enjoy! Trails are groomed daily depending on conditions. The grooming report is updated once a day during the season.

Club memberships may be renewed online now on the Zone4.ca page . The Skill Development Program for young skiers has several free spots. Enrollment is done on the same Zone4 page.

Our most recent newsletter was published on November 15. If you missed it, you may catch it HERE. Be sure to subscribe to our email list so you do not miss a thing!

We welcome all canadian visitors to the Kootenays. Please visit the TourismFernie website to help plan your trip to Fernie safely.